RISAFloor has the ability to assign camber design rules which allow the user more control over which members are cambered. A camber is the slight upward curvature of a steel beam which is used to compensate for deflection. A user can assign a camber directly to a member or set up design rules to force different designs for different members. Camber options are only considered for hot-rolled steel beams. 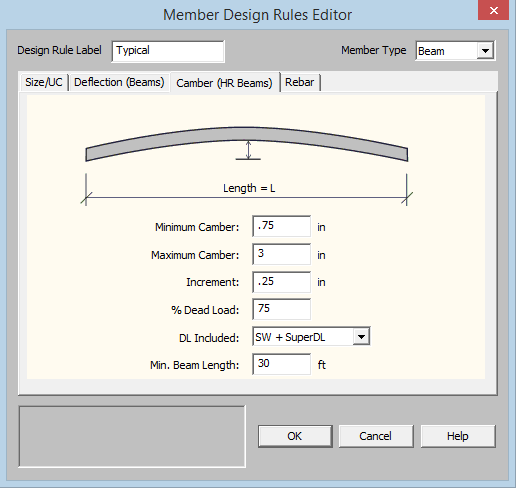 The camber options are listed in the Member Design Rules spreadsheet under the HR camber tab. The user can specify the minimum and maximum values a beam can be cambered, as well as the applicable increment for the camber. A percentage of dead load taken into account for the camber and the minimum length for a beam to be cambered can also be entered in this spreadsheet.

The DL Included option specifies which types of loads are included for the camber calculations. The available dead loads for camber are SW + SuperDL, which consists of self-weight and superimposed DL, and Total DL, which contains all dead loads (pre and post composite) to be considered for camber design.

A camber can also be set for individual beams in the Beams – Hot Rolled spreadsheet. Under the Camber column, an exact camber value can be entered. If this column is left blank, the program will use the camber options in the Member Design Rule to optimize the camber.

A camber can be assigned graphically to an existing member using the Modify Beams dialog box: 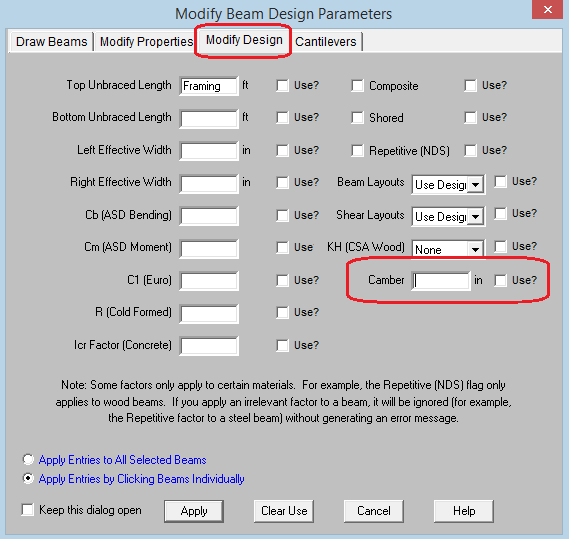