When to Use Virtual Joist Girders:

The engineer should use these Virtual Joist Girders in their analysis model whenever their joist girders are part of a lateral frame. They should not be used for simply supported joist girders which only resist gravity loads.

When Will I Be Able to Use Virtual Joist Girders in my Version of RISAFloor?:

How to Use Virtual Joist Girders in RISAFloor:

A Virtual Joist Girder database will be listed as one of the database options on the Hot Rolled tab of the Shape Selection dialog as shown below. 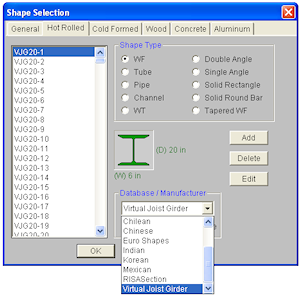 A Virtual Joist Girder option will appear as one of the Shape Group / Design List options shown in the Draw Beams Dialog below. 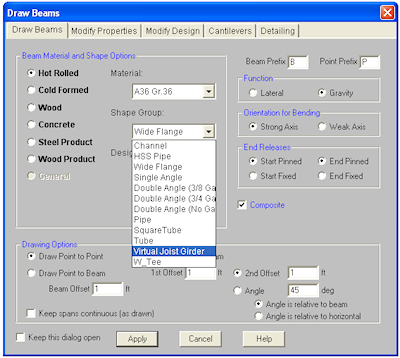 Note: This only appears when the Material is set to Hot Rolled Steel.

Depth Restrictions: The RISA optimization is done based on cross sectional area. So, if two shapes both satisfy stress or capacity checks, the program will choose whichever shape weighs less as the one which is considered to be more efficient. That shape will then be listed as the suggested shape as part of the redesign or optimization done by RISAFloor.

Material and Density: Generally speaking the VJG should be assigned to the same material properties (A992) as a traditional wide flange. However, because the weight of the webs is not currently accounted for, SJI suggests using a density which is 15% higher than traditional steel.

Unbraced Length: Currently, SJI is suggesting using an unbraced length equal to zero for the top flange of VJG members. However, this may not be appropriate for the bottom flange of the beam for VJG members that are part of moment frames.